Buses for the people! 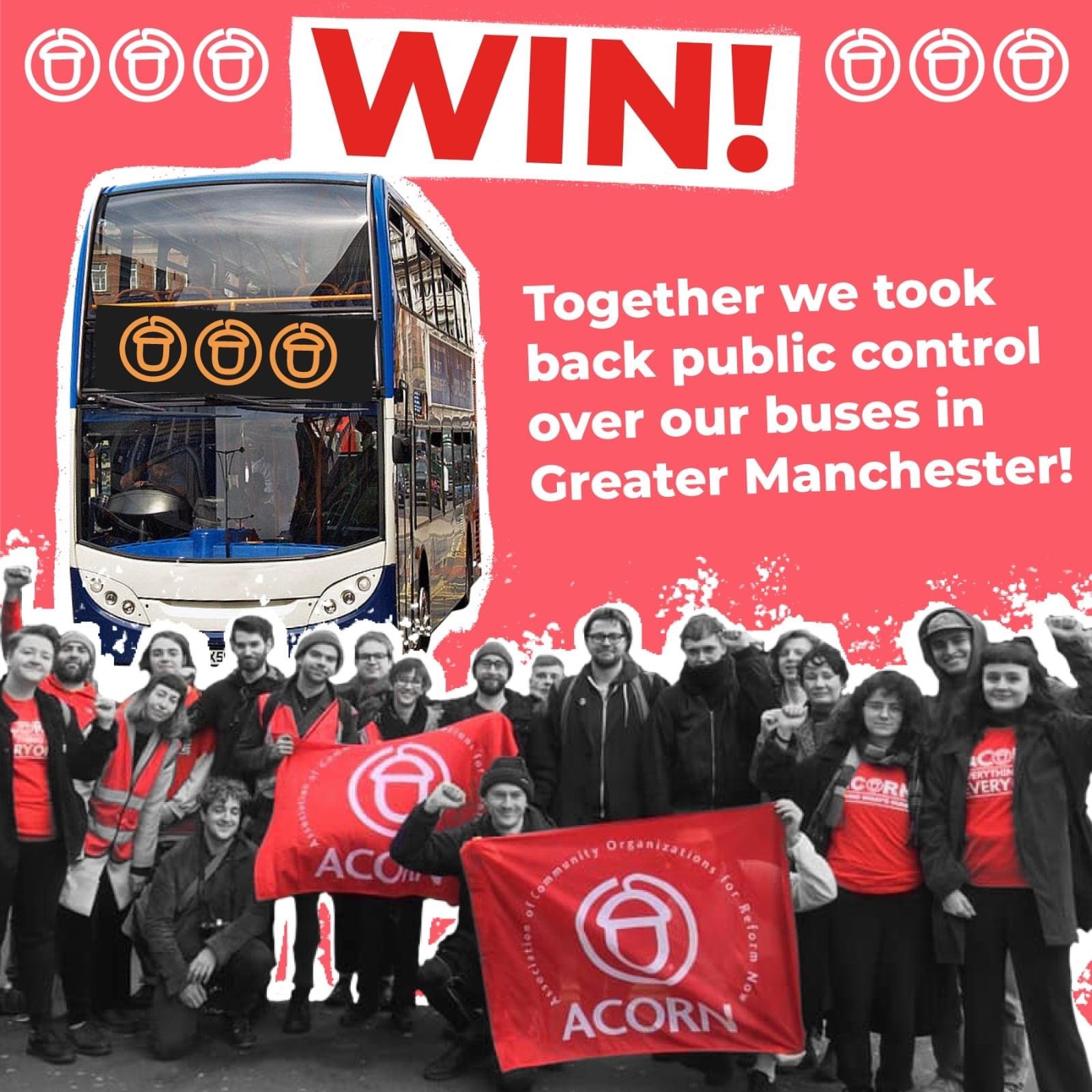 Months of campaigning alongside Better Buses for Greater Manchester and other groups recently delivered a victory for ACORN members and everyone involved in the campaign to bring Greater Manchester’s buses into public control, as Manchester council leaders voted nine to one in favour of bus franchising. The sole opposing voice was that of Bolton’s Conservative-led council, who bemoaned the “urgency” of this proposal despite it being four years since the initial review began.

ACORN’s campaign saw actions including letter-writing, social media call-outs, phonebanking, and in-person campaigning actions which helped to secure over 500 member responses to a consultation regarding the future of the city’s buses - making clear that the public were overwhelmingly in favour of bringing buses back into public control. Despite robust opposition from those seeking to profit from provision of public transport, ACORN was amongst the majority urging Greater Manchester Combined Authorities to bring buses under public control.

Alongside the Better Buses for Greater Manchester group, ACORN members delivered over 150 letters demanding bus reform to Mayor Andy Burnham’s office – an action which saw coverage from Manchester Evening News. Other Coronavirus-secure campaign highlights included an outdoor action speaking to bus users on Oxford Road, and a social media campaign where members shared selfies with their own signs in support of franchising.

It’s no surprise that Greater Manchester residents feel particularly passionate about their public transport, given that the city is often described as the “cradle of Britain’s buses”. It was in fact home to the first bus route to exist in the UK – Salford toll-keeper John Greenwood’s horse-drawn bus company emerged almost two centuries ago. Like the bus companies of today, Greenwood’s was privately owned and not subject to any external regulation.

In the aftermath of the First World War, many competing bus companies sprung up alongside council-run services, eventually becoming regulated in 1930 with the introduction of the Road Traffic Act. This forced firms to co-operate and reduced competition, with many firms and modes of transport accessible with the purchase of a single ticket, making buses much more affordable for the working class.

Come 1968, and the new Transport Act combined all local authority-owned bus companies into the Passenger Transport Executive - it was at this time that Manchester’s iconic and fondly remembered orange buses came into circulation. In 1974 this became Greater Manchester Transport, and GMT owned almost all buses in the region, until Margaret Thatcher’s 1986 Transport Act derailed this centralised effort. The 80s saw competition between bus firms not simply encouraged, but mandated, with co-ordination actively prohibited resulting in soaring prices for passengers. Services that failed to generate revenue faltered by the wayside and were quickly cast off by companies trying to maximise their revenue rather than provide a public service, leaving quieter or more remote areas desperately underserved. The remaining publicly owned service, GM Buses, was driven to dissolution in the early 90s.

Little has changed since Thatcher’s intervention, and the chaotically competitive nature of Greater Manchester’s bus services continues to this day. Many areas remain underserved, and there is little to no integration between different providers. Private companies set their own fares, regularly driving up prices to profit from the most popular routes. In the past decade, eight million miles of bus routes have been cut from Greater Manchester’s network, whilst fares across the country have increased by more than half.

The recent green light for bus franchising from Burham is a monumental victory for both ACORN members, campaigning partners, and the wider community, with re-regulation set to give local authority planning powers over the services. This will allow buses to become better integrated, more affordable, more reliable, and more frequent. Proper planning and expansion of the network can be carried out, with surplus profits from popular services used to subsidise the areas and times currently neglected by profit-hungry bus companies.

Bus users are not the only stakeholders set to benefit from a franchised service, with re-regulation allowing the possibility of standardised minimum pay and protected working conditions for drivers. Given the recent strike action from Go North West workers over abhorrent “fire-and-rehire” practices, it’s important to highlight that this change has phenomenal potential to improve the rights of many workers in the Greater Manchester region.

Greater London is currently the only city in the UK to have a regulated, integrated transport system. Those familiar with Transport for London will appreciate the comparative ease of the Oyster card when compared to Greater Manchester’s patchwork of services. ACORN Manchester hopes that this community victory will inspire organisers across the country to know that change is possible. We all deserve access to a fair, regulated, and integrated public transport system, with properly compensated and appropriately protected staff - and when we work together we can win just that.