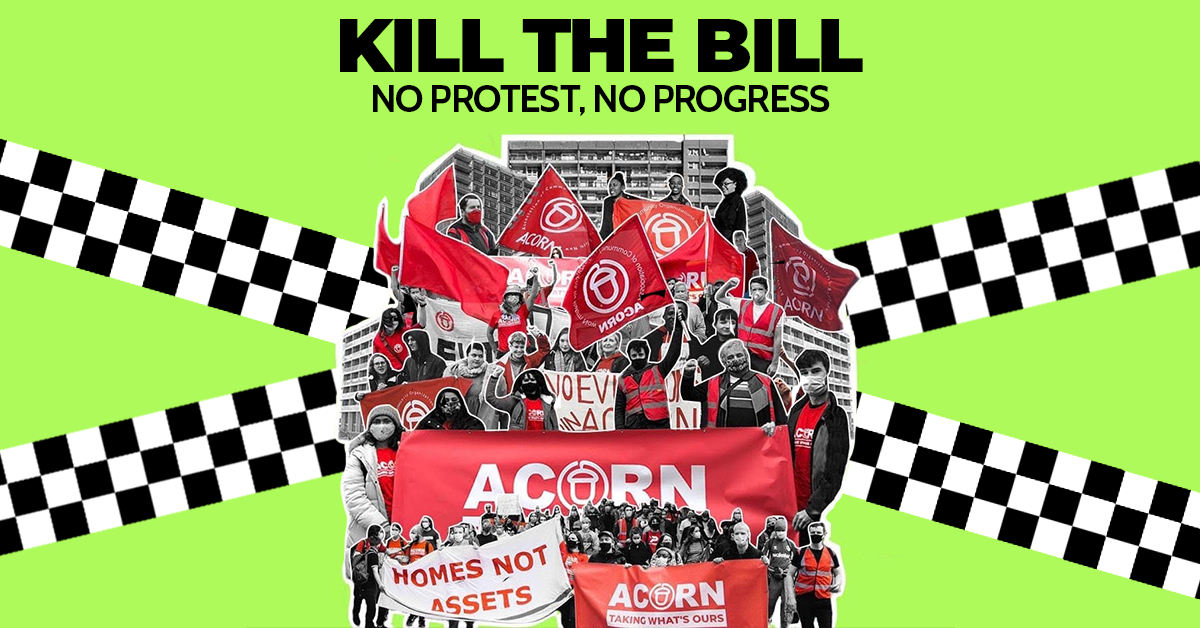 The Joint Committee on Human Rights has put out a call for evidence in relation to the Police, Crime, Sentencing and Courts Bill, and ACORN will be submitting our own full organisational response soon. This is a vital opportunity to stop this legislation from going forward and we need you to stand up and be counted by submitting your own opposition. We have created the template response below to make this easier; please note that you will need to copy this template into your own document before submitting here, and the sections in red and italic require you to add in your own thoughts and experiences so as to ensure that this template is not simply a copy of our own submission. To allow us to contact you about this and other ACORN campaigns, please fill out our quick supporters form to be added to our mailing list.

In this section, briefly introduce yourself and say that you are a member or supporter of ACORN.

In this section, briefly explain why you are submitting evidence for this Bill. In ACORN’s case this is because we feel that the protest and trespass areas of the Bill represent a direct threat to our members, our method of community organising, and our ability to bring about progressive change.

Infringement of our right to protest

Are the proposed changes to the law governing public assemblies, processions and one-person protests necessary to protect those adversely affected by such activities? Do the proposals in Part 3 of the Bill adequately protect the right to peaceful assembly (Article 11 ECHR) and the right to free expression (Article 10 ECHR)?

Any peaceful assembly of members of the public, be they large-scale political demonstrations and marches, one-person protests, or local campaign actions by community organisations, are likely to be considered disruptive by those who are the intended object of the protest, be they state actors, private businesses and other organisations, or private individuals. Currently lawful protest activities that target private companies (such as peacefully protesting outside a business) could be criminalised by this Bill. Article 11 of the ECHR outlines the right to freedom of peaceful assembly as a fundamental human right, and this is a serious infringement of that. The police and the British state already has significant - and overbearing - power over protest. Police have the power to impose conditions on all kinds of protest; this Bill seeks to expand these powers further while increasing the criminal sanctions for an organiser who fails to entirely comply with the conditions imposed on them by increasing the potential imprisonment period from 3 months up to 11. Additionally the Bill also increases the fine that can be imposed on organisers and attendees. This will not only significantly inhibit our democratic right to protest, but risks needlessly pushing people into the criminal justice system.

Furthermore, even if the object of the protest themselves are not put at serious unease by noise and other disruption from peaceful assembly, the proposed Bill effectively outlaws peaceful assembly that is deemed to be disruptive to bystanders. These parts of the proposed Bill (Clauses 54 to 56, and Clause 60) effectively strip citizens of their right to lawful peaceful assembly in predominantly residential areas, in which large numbers of people in their homes may argue that they have been disturbed by noise from protestors. The same is true of commercial locations, for example if a business believes that their operation has been financially damaged by loud protestors being in the vicinity of their shopfront, which may be seen to put off potential customers. Explain why you believe these proposals to be damaging here - relate to your own personal or organisational experience where possible:

The proposed changes are not necessary to protect those adversely affected by peaceful protest, as under current law they are already always protected from serious harm or violence. Overall, this Bill would seriously restrict the right to protest by limiting the areas protests may happen in, increasing criminal penalties surrounding protest, and applying arbitrary and subjective terms such as ‘annoyance’ that would allow protests that meet these vague criteria to be banned. This is in contradiction with the fact that under human rights law, governments are not to place unnecessary obstacles in the way of people wishing to protest, as well as a positive obligation to facilitate protest. As the Court of Appeal has clearly stated - protest “becomes effectively worthless if the protestor’s choice of ‘when and where’ to protest is not respected as far as possible.”

Are the new powers in Part 4 of the Bill targeting unauthorised encampments justified by the need to protect the rights of landowners and other users of the land?

The powers in Part 4 of the Bill targeting unauthorised encampments are not justified by the need to protect the rights of landowners or other users of the land. The rights of landowners are already ‘protected’ beyond any reasonable doubt, often at the expense of others whose rights actually need protecting; we have seen this explicitly throughout the Covid crisis as GRT communities have faced eviction from pitches with no protection. Additionally, research from Friends, Families and Travellers has shown that 75% of police responses to the 2018 consultation on unauthorised encampments indicated that they did not need or want more powers in this area. On top of this, 84% of police forces did not support the criminalisation of unauthorised encampments and 65% said lack of site provision was the real problem. Furthermore, the National Police Chiefs Council and the Association of Police and Crime Commissioners have stated that criminalisation of trespass would likely breach the Human Rights Act 1998 and the Equality Act 2010. The proposals fail to acknowledge that there is a distinct lack of provision for GRT communities, instead focusing on authoritarian criminalisation tactics that will serve only to harm an already marginalised community.

The criminalisation of trespass is a further entrenchment of the already substantial rights of landowners at the expense of the way of life of GRT communities, and represents a likely further restriction to our right to roam. 92% of land in England alone is already off limits to the general public - this division being deepened further with criminality is unconscionable and is at odds with the Government’s commitment to “[open] up the natural world,” as stated in its 25 year Environmental Plan. Explain here how this may have an impact on you personally, or members of your organisation, or your organisation’s actions where possible:

Explain here why you think these proposals do not include adequate safeguards against abuse - i.e they are extremely vague and can be open to misuse through interpretation:

The deadline for submissions is Friday 14th May.

If you have any questions about this, please email [email protected] and we will get back to you as soon as possible.