Last summer - during the worst public health crisis in living memory - a house of ACORN members, most of whom were key workers in the care sector, came to the union for help with a host of problems with their house, landlord, and letting agent. 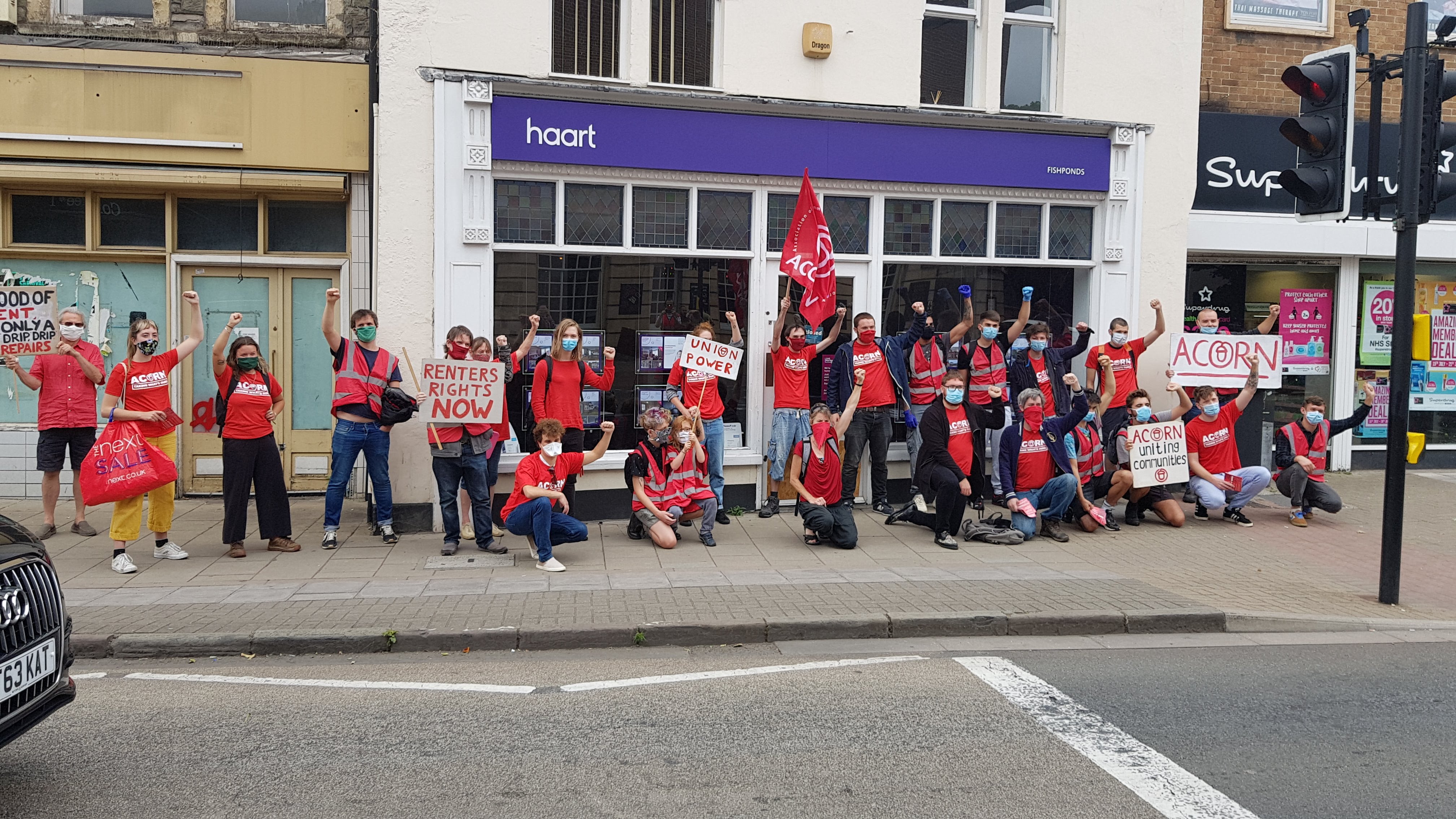 The group of four moved into their house in January 2019 - a few months down the line, the letting agent contacted them and claimed that no one should have been living in the fourth bedroom as there was a gas connection live in that room. The agency then claimed that they had never given permission for four people to live in the house, despite the fact that there are four people on the contract. Other problems included a broken pipe in the garden which attracted rats, ongoing and chronic disrepair issues with bathroom leaks dripping through the roof onto the cooker making it unusable and unsafe, and the shower also was continually faulty. Having a faulty shower is a bad enough experience for anyone, but as the tenants were key workers who needed somewhere to wash after work to ensure that they were COVID-safe, this made the issue much worse - they could have lost their jobs and were put at even greater risk of infection. Repairs took months to resolve and were often carried out in a shoddy manner by cowboy contractors. Additionally, Environmental Health at Bristol City Council advised us that there was no HMO license for the property, despite one being required. Unsurprisingly, the whole episode caused significant emotional distress to all tenants involved.

Sadly this is not an unusual situation, and the letting agents continually denied knowledge of these problems and fobbed off our members. They wanted the three remaining occupants to pay the rate that four of them were previously paying, all for a property that didn’t have the proper license and was in a constant state of disrepair. Not only that, but the landlord and his partner came over unannounced  - without providing the legal 24 hour notice - and threatened our members, saying he would “eat them for breakfast” - all of which was recorded on film.

Following this, our members were issued with a Section 21 ‘no fault’ eviction notice by the landlord in June - seemingly because they had dared to complain about the various problems with the property. Naturally, ACORN sprang into action and assembled a team of members to help fight the case. Members did their research and received legal advice from Justice for Tenants who informed us that the landlord's lack of appropriate HMO license was illegal and entitled the tenants to take the landlord to court for a rent repayment order. This was something that came in handy later in the case.

The team of ACORN members and tenants came up with these four demands to put to the landlord and estate agents:

3) All outstanding repairs to be completed, and an agreement of future repair timelines

These demands were sent to the landlord and letting agent. Both parties were unwilling to meet us and discuss our reasonable demands, so we turned to direct action as a way to achieve our shared goals. In the following months the landlord’s lawyers issued legal warnings claiming that they would take action against us if we did not accept the eviction notice and pay the rent arrears. Instead of caving to the legal threats, the tenants alongside other ACORN members organised an action to put pressure on the landlord and letting agent. The letting agent was a secondary target but one which still had power to change things for our members. Tenants and members organised a march on the letting agent in order to show our strength as a union and send a clear message to the landlord that even during a pandemic we will always organise and defend our members.

The letting agents march took place in July and we mobilised around 25 members in a COVID-safe manner to take our members' demands directly to the letting agents. We were organised with various roles allocated and a clear plan of action to deliver our demands to the letting agent in a powerful way. Unsurprisingly, they were too scared to face the tenants with the strength of the union behind them. They decided to shut up shop for the day instead of facing up to their unprofessional and unacceptable treatment of our members. This action was a turning point for the campaign, as it filled our members with the confidence to push on and let the powers that be, both the landlord and letting agent, know that ACORN never gives up on it’s members. It also gave the team a morale boost to know that we were on track to winning. 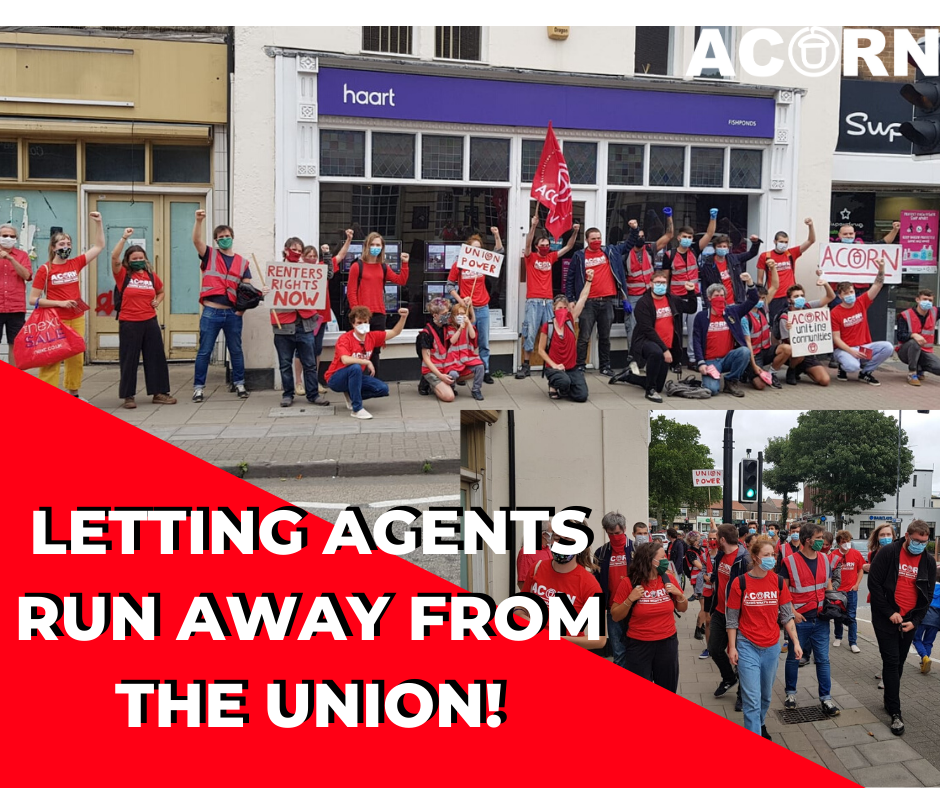 After the march on the letting agent, with the landlord on the back foot, we received yet another legal threat from him. After we informed him that, in fact, he had broken the law - not us or our members - and that we would be escalating things further until our demands were met, he caved in and agreed to what we were asking for! Not only did we secure £5,000 in compensation for our members, we got a guarantee from the estate agent and landlord that they would not give a bad reference to our members when they eventually came to look for a new home. Direct action and the power of the union got the goods once again!

Members Florin, Nick and Ali after their massive win: 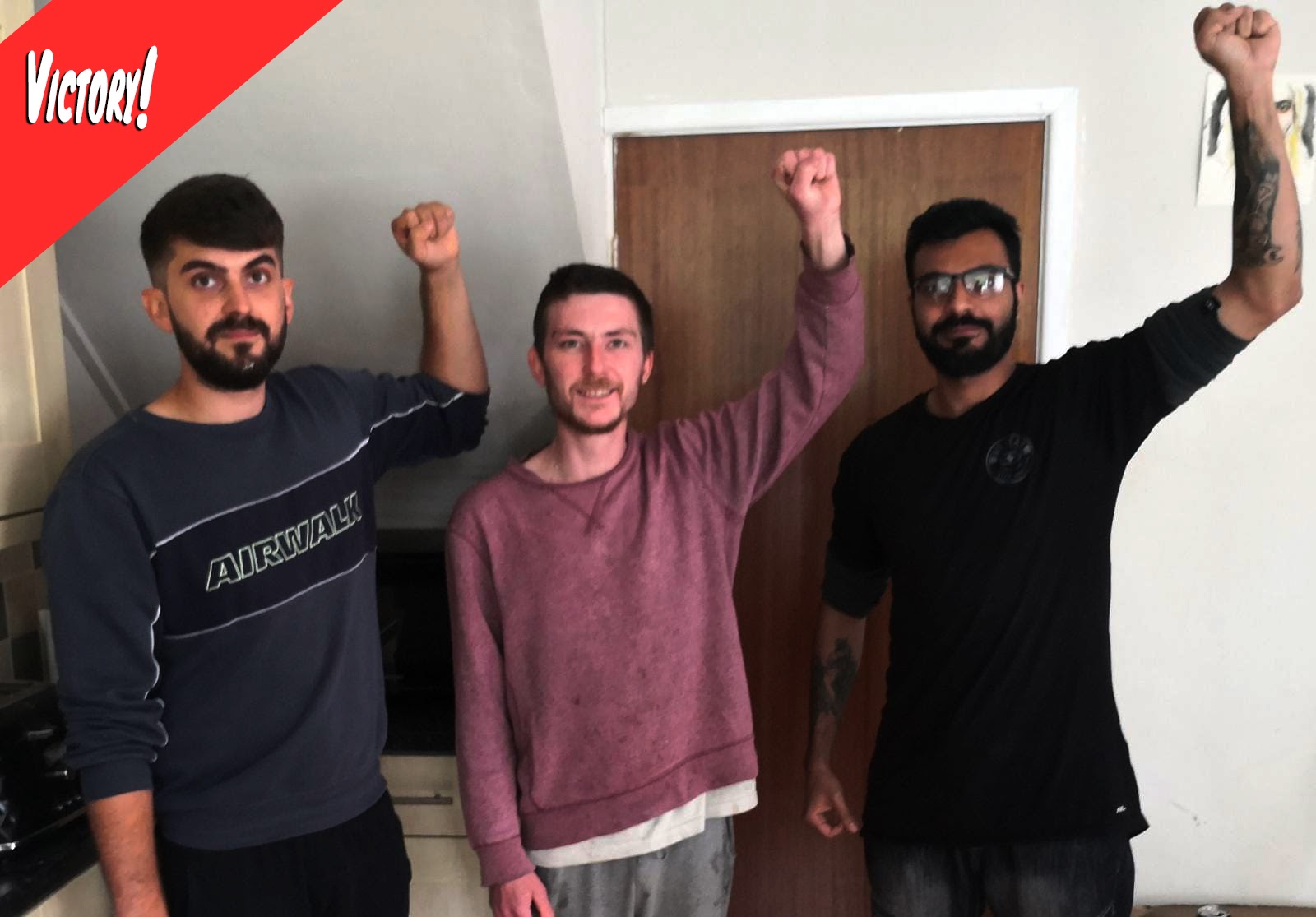 Out of this campaign, ACORN Bristol developed members into leaders - both the tenants who were facing eviction, and the members who assisted on the case. They gained confidence and experience by coordinating actions, taking on organising roles, and fighting the case together. Just weeks after winning all their demands, the very same tenants who had recently faced eviction themselves turned up to defend fellow members from eviction. They joined the union to get support with their own situation and then stayed to fight for someone else. It was truly beautiful to see members of the union who had just won show up in solidarity with other members. This is exactly what ACORN is all about, empowering people to take back power and defend each other. Ali has also gone on to be our national spokesperson on the radio, gave interviews to various newspaper outlets, and has helped to coordinate member defence cases. He also spoke at our national day of action fighting the lifting of the eviction ban back in September: 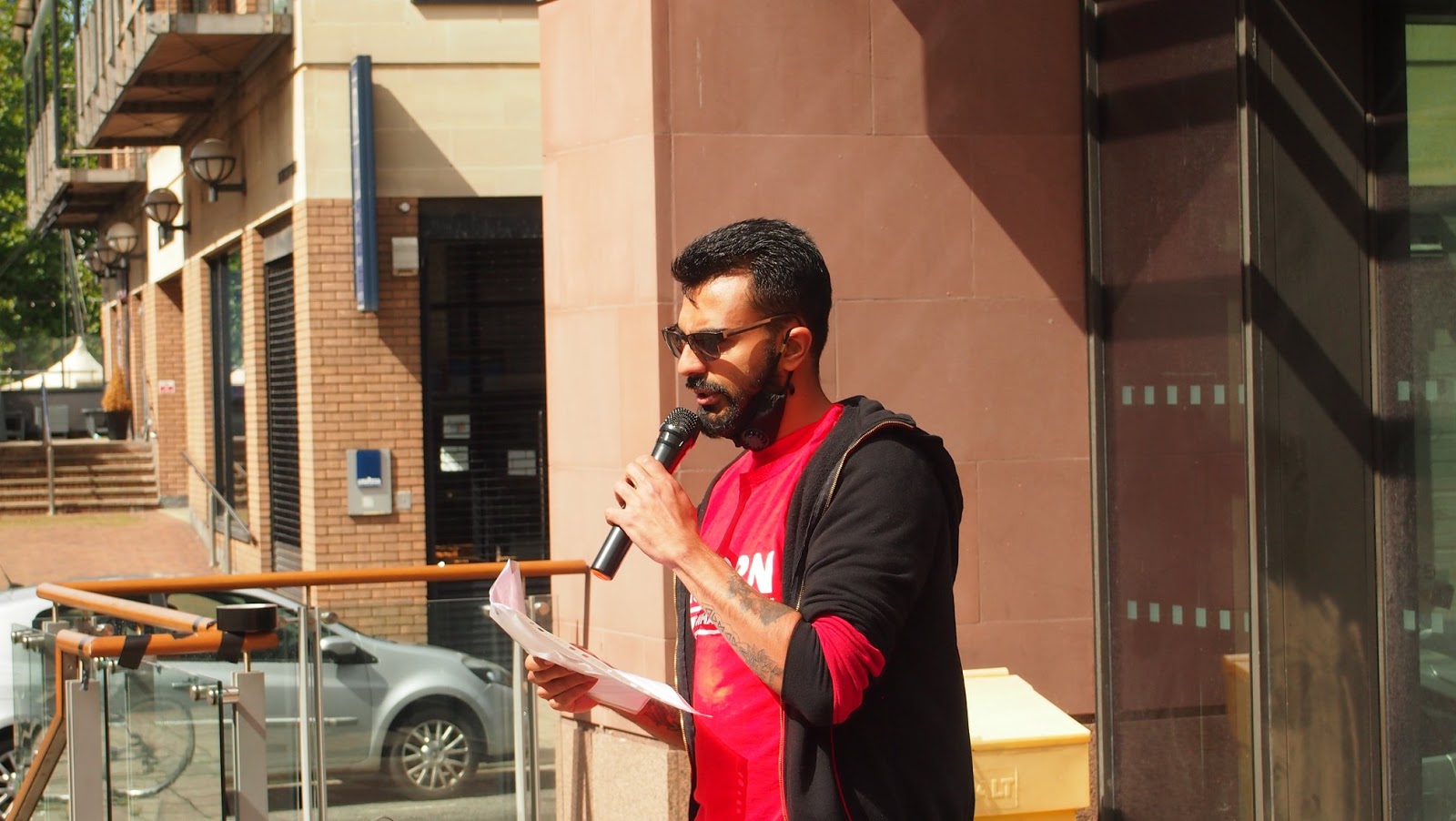 All in all, this was a tough case that lasted four months and really tested our members' resilience. At times, some people felt like giving up, but through the unwavering support of ACORN members we persevered and we won. This was done through hard work, careful planning and collective direct action. ACORN members won big against a powerful landlord and well known national letting agents. This case is a classic example of ACORN tactics working for our members.

The message is clear: there is power in a union.